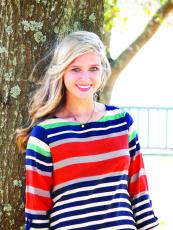 Senior Mackenzie Hendrix was chosen for the 2015 Rayville High School Student of the Year.

She has a 4.0 average GPA average and has been involved in many clubs at RHS during her four years such as the following: Fellow Christian Students, Student Council, Explorer’s Club, and 4H.

She was also chosen this year for Who’s Who and Miss RHS. Mackenzie also plays tennis and was a State Tennis Qualifier her junior year.

Among many responsibilities, she works at Dr. Tyler Heath’s Office, D.D.S.

During her spare time, Mackenzie enjoys running 5ks with her mom, hunting with her dad, playing board games with family and friends, baking desserts for family and neighbors, and attending Hornet sport events.

Hendrix plans to attend Louisiana Tech and major in nursing. She hopes to become a nurse anesthesiologist.